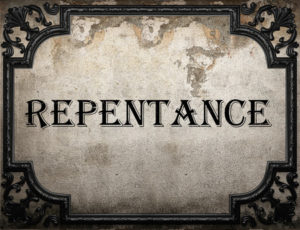 When Samuel died, Saul took an action to make right with God.  He put away those with a familiar spirit (spirit guides) and the wizards.

Now Samuel was dead, and all Israel had lamented him, and buried him in Ramah, even in his own city. And Saul had put away those that had familiar spirits, and the wizards, out of the land. – 1 Samuel 28:3 (KJV, emphasis mine)

Saul is trying to please God by his good works. He is seeking favor with God by doing what he thinks is right. However, God is not impressed with man working for his salvation. God requires repentance, which Saul hasn’t and never will do.

Therefore say unto the house of Israel, Thus saith the Lord GOD; Repent, and turn yourselves from your idols; and turn away your faces from all your abominations. – Ezekiel 14:6 (KJV)

Saul seeks God concerning his fear of the Philistines, but God does not answer him.

And when Saul enquired of the LORD, the LORD answered him not, neither by dreams, nor by Urim, nor by prophets. – 1 Samuel 28:6 (KJV)

When Saul doesn’t hear from the LORD, he returns to the sinful practice that he put away.

This action shows that he never did repent when he “put away those that had familiar spirits.” He has returned to his sin.

What does that mean to us? Do we have sin that we have not repented of? Is there sin in your life that you return to after you have put it away? If so, repent and don’t go back.

For godly sorrow worketh repentance to salvation not to be repented of: but the sorrow of the world worketh death. – 2 Corinthians 7:10 (KJV)

Have godly sorrow over your sin and repent.

Make sure when you die that you are not standing knee-deep in ashes.